Seligman to Tonopah, the hard way 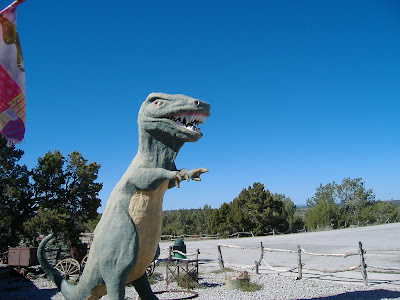 At the crack of 5, I chose to sleep until 7.
Kingman to Seligman, with a stop at the Grand Canyon Caverns, was a smooth, magic glide of a trip. Even Hackberry’ ruins looked clean in the bleach of the morning sun.

I was the only one at the Caverns, usually a meeting ground for elderly Germans, and just sat in the sun for a bit – then headed to Seligman.
I’ve never seen it look better – painted, prosperous and unchanged. At the hotel right outside of downtown – where I spent a week as a child waiting for my mom to get the station wagon fixed – a new manager had redone the place. He said that, ‘the old ladies son had ran it into the ground’ until he took over. I estimated the room number when he asked me (memory only remembers magical thoughts,) and he opened it up for me – looked plain, but sort of like I thought it should. A nice guy with a clean motel – sans pool – which queers it a bit. I took pictures and told him I’d pass on the place to others. 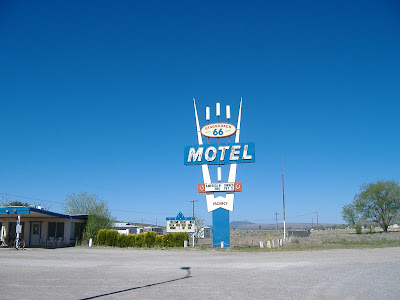 Ate at place, ‘Westside Lilo’s Café.’ Great food – highly recommended for breakfast. If you meet the waitress Pam, tell her I prayed for her 30 year old son who has a seizure disorder, but is ashamed of it and broke his collar bone when he ‘felt one coming on’ and tried to run upstairs before it happened in front of his friends.
Next stop – Oatman.
The road from Kingman is awesome!! Back in the day, Route 66 was this road, a winding road up to, and down from, Sitgraves Pass – this must have been a scary highlight for Okies’s on their last rubber.

Oatman is an old mining town/tourist trap – it’s almost a carbon copy of Nevada City. The big draw is the donkeys – millions of them, all wild, free and existing like the cows in India. One of them bit my daughter (Allison) when she tried to pet him without a carrot in her hand – filthy cloven-hoofed devils. 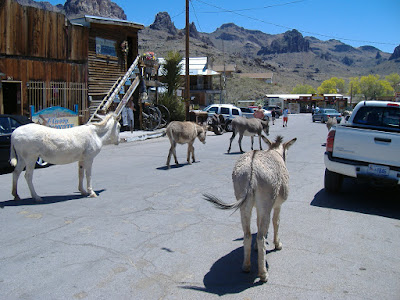 From there – non-stop to Tonopah.
Tonopah is a mark on the weather channel that, I think, everyone in the bay area has seen over and over. It’s also a pretty cool mining town at 6,000 feet. This is a pretty place to stop for the night – and my hotel advertizes that it’s, ‘perfect for Grandma.’

Sounds like you're having a good time! Hahaha and yea i remember that donkey bite.

The part about the broken collar-boned-seizure-guy....damn, that's just outright terrible. Although deep down inside...I'd almost enjoy seeing that on YouTube. ;-p