Road trip FAQs for the uninterested 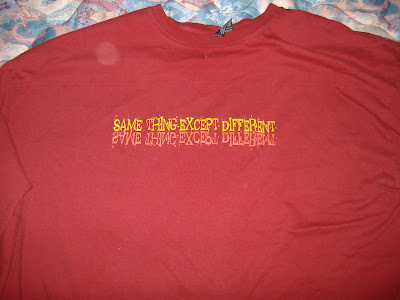 1. The cop that stopped me in Barstow needs more color. He was big in a fat kind of way, ugly with a steroidal acne blush, and scary on a Steven King travels through Nevada while dreaming of lepers tripfest. I kept thinking he wanted to pull me out of the car window in pieces, if needed. If I were a woman, I would have dialed 911 before rolling the window down.

2. Route 66 from the Bagdad Café to Golf across the desert is unrideable – the max speed is 40mph, and it’s a rough ride at that. It has obviously not had maintenance in the last 30 years. On the other hand, and meth lab, barring transportation problems, might find a nice home in the Mohave – and maybe you should think about that late at night while driving alone (see #1.)

3. As a child, I had three-year relationships with people (Army brat.) I’ve learned to keep the magic going as a n adult, with difficulty, but am learning that it’s sometimes more about my fear of being found out than it is timing and readjustment. I don’t fear rejection – I don’t care enough – I fear rejection after someone gets to know me and enough of the real stuff has leaked out to give an informed opinion. Not sure if it’s self-fulfilling prophecy, on my part, or just good common sense on the part of others – but some real patterns have developed in both work and play. I almost cringe when people like me at first meet – the same people reject me once they find out I’m not there projection of what they thought. The funny thing is – people who don’t like me on first blush, at time, end up big supporters. I’ve learned that other people can’t see me any better than I can – very scary, and I wonder how this has affected behavior – and more important, what, if anything, to do about it.

4. Different on this trip – small things, baby steps. I sent post cards to 3 people. I talked to people when I stopped. I stopped at places, and for reasons, unclear to me.

5. There are a lot of fucking people in California – only Las Vegas was anywhere close – but urban suburbia is non-stop in the Golden State, except for a small area around Stockton.

6. Beginning and end, and now for some plans – cut my hair, clean up my resume and look hard for a job. I have realized that I may not get a job quickly, and than I can continue to enjoy this time off without guilt – but I do need to do the footwork and keep the looking on the clean side of the street.

7. I may live in a world I create most of the time, but I’m going to start issuing more passports and travel Visas. I’m not North Korea, other than in my hair style and self sufficiency (juche.)
at May 08, 2009