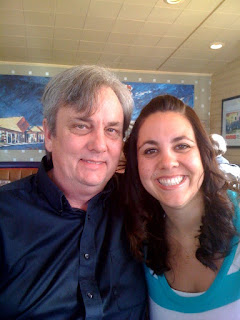 From the Hotel, we drove down Santa Monica towards the ocean. The five miles took a half-hour, but the drive was more about attitude than speed.
Imagine driving with a monkey in the back seat setting off ladyfinger firecrackers rapidly and randomly -- most of the time throwing them outside, but occasionally not -- for a long time.
We found Allie's place -- very nice and in a great location that bordered Beverly Hills, but still remained safely in the charms of tattoo parlors and the Trocadero.  Now armed with the geographic, we headed to the hills on a rich people hunt.
After running up and down a few streets it all started looking the same, so we stopped at a nice looking park across the street from the Beverly Hills hotel. With delight I found the marker showing the park was dedicated to Will Rodgers – the very man I had decided as child I wanted to grow up to be, and a fellow traveler from the Oklahoma Territories, (to be exact, a “punk” Will Rodgers – the modifier necessary for my vision.) I sat in the shade, Mary in the sun and we watched as two ducks make fun of each other in the pond. 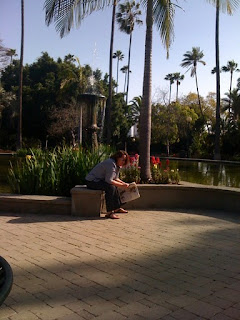 When Allison called we left the park and drove to her apartment. Because we were elderly, she met us outside so that we wouldn’t get lost, what with it being a two-story and all.
Allison always looks good in pictures – she’s practiced being a star all her life. In real life – she looks better – alive in a way that I haven’t seen her in a long time. Inside, her place was a large studio with all the fixin’s – older with a nice funkiness, and I liked it. After the right amount of hugging and talk, we headed out for Cuban food and a night of the town.