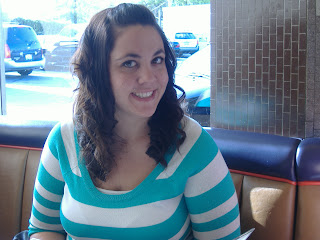 It’s hard to watch a child do things and not step in to help, even when the choices they make are bold and clean – and much better than any you made at their age. I guess it’s a combination of pride and anguish – pride that they are shaping their individual futures in a way you could never dream of for yourself, and anguish that no matter what the safety net you place beneath them, they still have to do it with the pain of thinking they are alone.

When you get older you realize you are never alone when other people care about you and pray for you their fondest dream – no matter how much you beg.

On Saturday, since Allison had to work later that morning, we met her at her apartment and followed her to “Norm’s” for breakfast. Norm’s is a converted Denny’s in Hollywood, and, as Allie told us, “It’s the place they film that new show with the old guys.” The show, “Men of a certain age,” is one of our favorites – though the actors are 10-years younger than we are.

Imagine a Denny’s where the food is good: eggs from a real farm, sausage from a butcher that are then formed into patties in the kitchen, hash browns that come crisp as a matter of house policy.

After breakfast, we said sad goodbyes to each other and went separate ways, again.

We had planned to go with Allie to the Getty museum before her work thing came up, (though Mary did voice a suspicion that she was blowing us off to go to the beach.) We went without her. 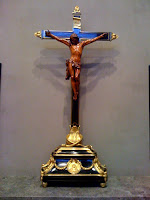 At the Getty, you park in a single level lot after paying (for parking only – the Getty is free.) When parking, you realize it’s not a single level, but seven levels – down and deep. Must have been quite a hole.

From parking, we took the tram up the hill to the actual museum. Towards the east you could see Tom Jones’s vineyard taking up a large part of a hill. From murmurs in the tram: It’s the only winery in Beverly Hills, and they don’t sell to the public.

The Getty is a wonder in the spirit of world’s greatest wonders. By far the best museum I’ve ever seen – and that’s without the stuff inside it. You could spend days just walking, looking and sitting without once going inside. In a thousand years, after the 4-inch slabs that cover it fall off, it’s going to be a concrete ruin on a hill that a new dark-age people will worship as the palace of the gods.
at March 30, 2010