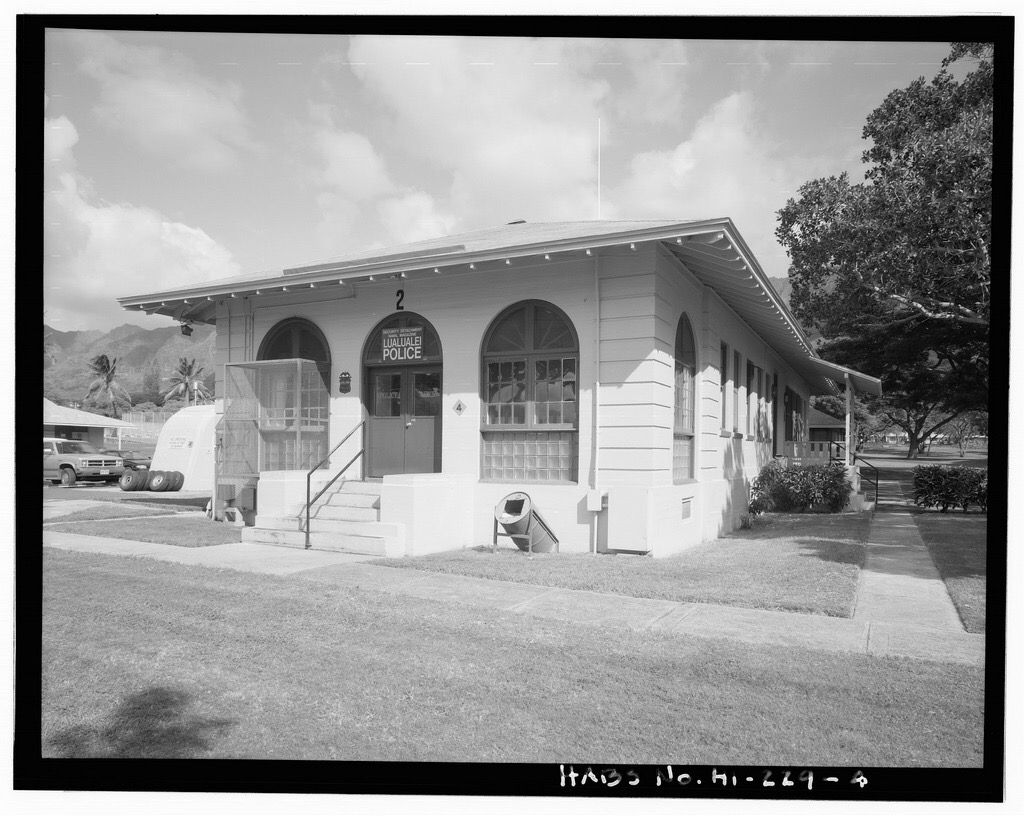 Lualualei Naval Magazine – this was the medical dispensary that I worked at from 1973-77 as a hospital corpsman. We were on 4-section duty for the time I was there, meaning every 4th day we stayed 24 hours – we slept in the back. We walked across a field (where the big tree is) and ate at the marine mess hall. This was before microwave ovens, ATM machines, cell phones, cable tv and the internet – this was the real olden days, we read books and wrote down things.

The marines called us all Doc and were reverential. – we were treated well, probably because of Viet Nam and the other wars that popped in and out of reality. Hospital Corpsman were very helpful in wars and we had a lot of goodwill built up because of this.

Where you see the tires parked on the side of the building used to be a covered parking spot that held the ambulance – It was an old school station wagon ambulance and for calls at night we called a marine over from the barracks next to the mess hall to drive us.

We kept logs of what happened on duty – big green log books in which we wrote long, long stories and fables – I’ve always wondered if these logs are stored somewhere like in Indiana Jones, in some giant warehouse, buried like the little green men from New Mexico. No one ever called us on our log books – we were a true backwater where they sent the strange and discontented. As long as we didn’t set fires, they left us alone. Most of us had to be reminded to get haircuts many times, though some tried to hide out with short hair wigs for inspections, with varying degrees of success.

I lived with the people I worked with – we had three houses on the beach in Makaha, all kind of connected and surrounded by a hedge of something impenetrable. There are stories, and one very memorable Thanksgiving.

One of the weekly jobs was to get water samples from the mini-lakes on the base for testing. In the middle of this large naval magazine, there were small areas leased out to cattle people for some reason I never figured out. On the shit the cattle left, after it rained, were mushrooms. So, on many weekends, the house member on duty would go out to get the water sample, and then pick a bag of mushrooms on the way back for later use at the houses. Those left uneaten we frozen in baggies in green turd like ropes. Eating them later was hard because of this, both psychologically and gag reflexively, so mostly we ate them fresh from the bag without rituals or much talking about the point of it.

Thanksgiving, big storm with giant waves crashing on the porch, higher than Jesus with the mushrooms and related stuff. Turkey with all the fixings, bells ringing, no TV, just very loud music from the high-end audio equipment every one of us had bought from the PX individually.

I remember trying to figure out how many mushrooms I needed to take to get high, and then doubling the amount to make sure. I remember making a pile of them.  I remember everything and nothing after that. I will never forget any of that night but couldn’t tell you much about the specifics if you asked. It was fun, no one died.

I was really only stationed at Lualualei a couple of years off and on – most of my time was at other places, but all of my Four-section duty time was spent there. Loved it and have good, though random memories of it.

“as far as [a] consciousness can be extended backwards to any past action or thought, so far reaches the identity of that person; it is the same self now as it was then; and it is by the same self with this present one that now reflects on it, that that action was done” John Locke